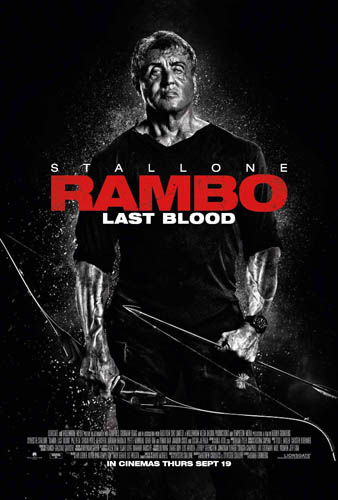 John Rambo has retired to live a quiet life on a ranch in Arizona, but has flash backs to his fighting in Vietnam. Rambo is living with his family friend Maria (Adriana Barraza), but when her teenaged grand-daughter Gabrielle (Yvette Monreal) is kidnapped and trafficked by a Mexican drug cartel Rambo goes to her rescue with the help of journalist Carmen (Paz Vega). Rambo uncovers a sex-trafficking racket across the US-Mexico border and sets out to rescue the girl while taking down some extremely dangerous people.

Initially the director takes time to establish Rambo’s relationship with Maria and Gabrielle. Rambo acts as an adopted uncle to the teenager and this calls for empathy, not easy for the macho musclebound Sylvester Stallone .Stallone mumbles his way through some of the emotive scenes, clearly failing to find the emotional depth needed. Paz Vega’s arc as journalist Carmens’ appearance is too brief, but she does draw out some emotional response from Stallone. The villains are stereotypical villains, typically no match for Rambo. Sergio Peris-Mencheta as Hugo, the Mexican cartel leader brings more depth to his evil character.

The plot is entirely predictable Rambo rescues Gabrielle who dies from her injuries and Rambo sets out to take revenge and the action is ruthless and unbelievably bloody rather like a computer game. The brutality is over the top lacking any sense of realism. Enthusiasts and casual fans know Rambo as a killing machine, and that notion is thoroughly reinforced. However the film as it’s title suggests is mostly blood with insufficient emotional grounding. Lots of action but a simplistic plot does not make this a masterpiece!