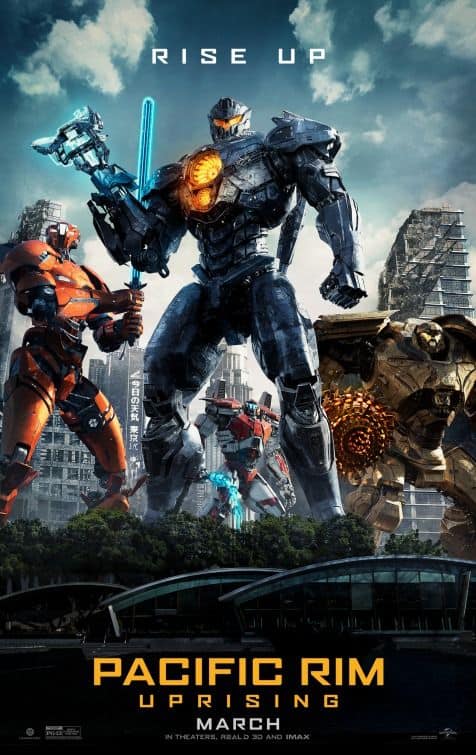 Ten years after the end of the Kaiju War, Jake Pentecost (John Boyega) makes a living selling stolen tech; however he finds himself arrested and back in the Jaegar pilot programme under Mako Mori (Rinko Kikuchi), with Nate Lambert (Scott Eastwood) and Amara (Cailee Spaeny), just in time to face the newest threat.

Everything about this film is big: the robots, the monsters, special effects, the fight scenes, and clearly the budget. Everything about this film should lead to a good night at the cinema, and for the most part, it does. The spectacle is enough to guarantee a good time when the script inevitably slows a bit and you’re twiddling your thumbs waiting for the next big thing to happen.

John Boyega breaks out every ounce of his boyish charm as the roguish Jake, which works very well, as does Cailee Spaeny’s somewhat scrappy genius that is Amara. But if you’re going to watch this film, you are not going for the acting, you’re going to watch all the robots and monsters, who, unsurprisingly, steal the spotlight. It is very hard not to draw parallels between this and the Transformer’s franchise, and much like that series, it doesn’t necessarily get better as they make more films.

There are plenty of parallels that you are supposed to draw when you look at futuristic, dystopian robots fighting and the world today, but this is probably unintentional. It is definitely a mindless movie, and if you’re reading into it, you’ve got bored and started to think about other things. You go for the spectacle and the spectacle only, which, to be fair, is worth going for, but don’t expect too much from this movie in other areas.