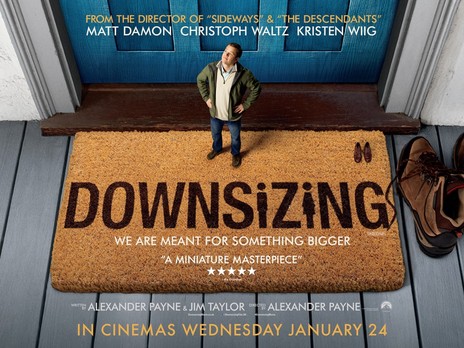 The human population is increasing and a solution to this is downsizing.

Human beings can be shrunk down to just a couple of inches, this means that the drain on natural resources and waste created by humans is drastically reduced. The main characters in the film are a couple that are struggling financially and find this to be viable option as in the miniature world their finances would stretch a lot further meaning they could live like royalty for the rest of their lives.

Of course there is a twist and not everything goes quite to plan.

The film is very topical at the moment as it address’s the need for human kind to be more environmental as well as immigration issues.

For me the film was too busy trying to get these messages across rather than being entertaining.

Although the film does have a few funny moments and Christopher Waltz is very good as he always is it could of still done with more comedy and a deeper story line. As with a lot of films at the moment, you will see most of the best bits on the various trailers that are out.