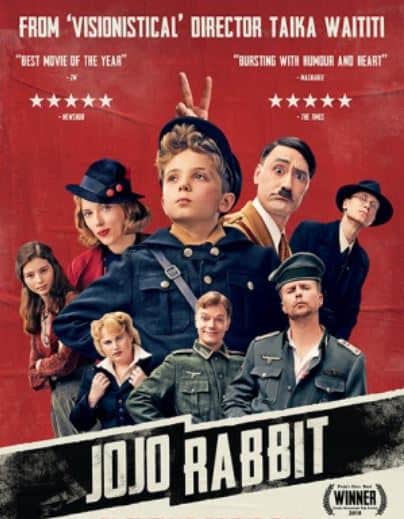 JoJo Rabbit is a unique take on WW2 through the eyes of an 10 year old boy, a Nazi fanatic and aspiring soldier.The film focussed on JoJo’s journey from his “Hitler Youth” camp training and nazi obsession to his dilemma coming face to face with a young Jewish girl-that he discovers is hidden in his house. Throughout the film JoJo’s imaginary friend appears- who, in keeping with the theme of the film- happens to be Hitler played by director Taika Waititi (you may recognise the name, having previously directed marvel hit Thor:Ragnarok) . Whilst the film is dark at times, there are some funny moments particularly with Rebel Wilson (from the Pitch Perfect franchise) and British comedian & actor Stephen Merchant. Excellent acting by Scarlett Johansson who plays JoJo’s mother but equally as good is young JoJo played by actor Roman Griffin Davis