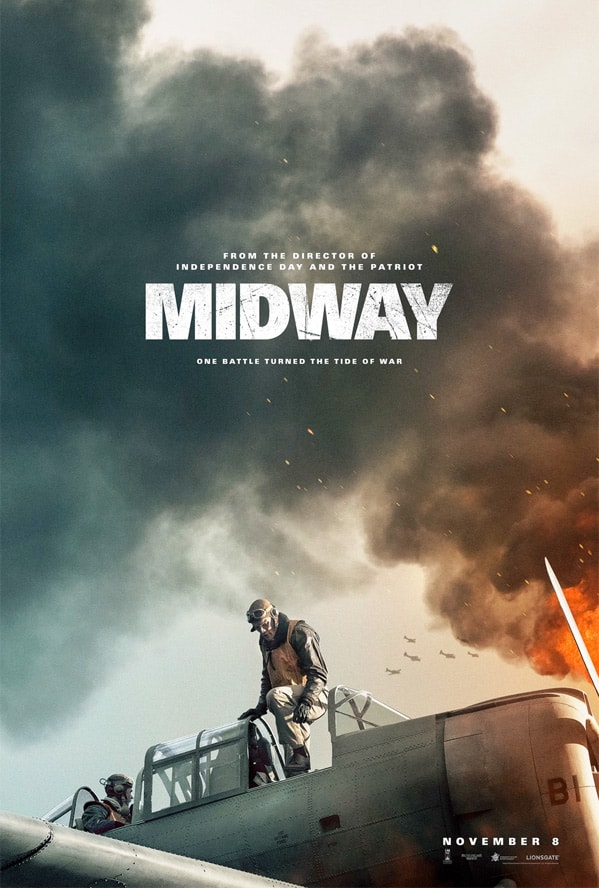 Midway is the non-fiction story of the initial USA and Japanese conflict of WW2, and it being the anniversary of Armistice makes the movie even more impactive. However as the film has been released post the summer boom and having come across minimal marketing I fear it may not be well seen by audiences at the cinema. This would be a real shame as the film’s conflict scenes are visually amazing. The movie starts with the Japanese attack on Pearl Harbour. Due to the infamy of this event the scene is brief which I feel is spot on as it shows the background to the US being drawn into WW2 after 2 years of neutrality, but is necessary to see the subsequent two retaliatory attacks by the US on Japan. As well as the conflict on screen we see the background work by both countries commanders in trying to identify their enemies next move ,both with a view to destroying their enemies fleet, which was necessary by both countries to secure the winning of the war. We see the story of US intelligence officers in correctly identifying the target of Japan to secure a US island, Midway, which would allow Japan an outpost to launch further attacks to the West of the USA.  Unbeknown to Japan , the US identified the target and the timing of the planned attack and surprised the Japanese in a counter move that did subsequently end up destroying the Japanese fleet. There is some great acting in the film and the real life heroes are portrayed by big names such as Patrick Wilson, Dennis Quaid and Woody Harrelson.  As with most war movies the lead character is self- confident bordering on arrogance but he is relatable and it’s subsequently his personality that is an asset to him. The bravery of men on both sides of the conflict is recognised and the film fittingly ends with a tribute to both the US and Japanese military involved. The audience is also reminded of the atrocities placed on the occupied Chinese citizens at the time. Unlike 2001’s Pearl Harbour movie this film focuses less on relationships and more on the actual battles which is thoroughly enjoyable to watch, but is not on par with movies such as Saving Private Ryan or Dunkirk.

Review by Deano B