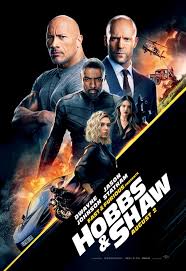 With 14 (my daughter) in tow for this film, I was a bit worried that I couldn’t fill in any background information on the Fast & Furious films as I’d not seen them. I didn’t need to worry as the Hobbs & Shaw film is a complete stand-alone adventure.

The story-line is easy to work out, bad guy wants secret formula,  good guys have it and will do anything to protect it. There are of course, more complicated elements to it, but essentially the basic story let’s the main leads crash, smash and curse their way through most of London and the globe. With some foul wise-cracks along the way.  The dad in me thought maybe the wisecracks were a bit strong for a 12A certificate,  but 14 laughed and wowed at all the crazy antics from the main leads. It’s a great visual ride, and the film skips along smartly, never really allowing you to take much of a breath. All of the film’s leads are enjoying their roles, and getting equal chances to shine. Special note to Vanessa Kirby, not allowing the boys to have all of the fun. Idris Elba self proclaimed  “black Superman” clearly steals the show and is loving the over the top role he has been given. If you’re looking for something to entertain your (older) children you could do a lot worse. Sit back, relax and enjoy the film, you’ll love it more than you thought you would.