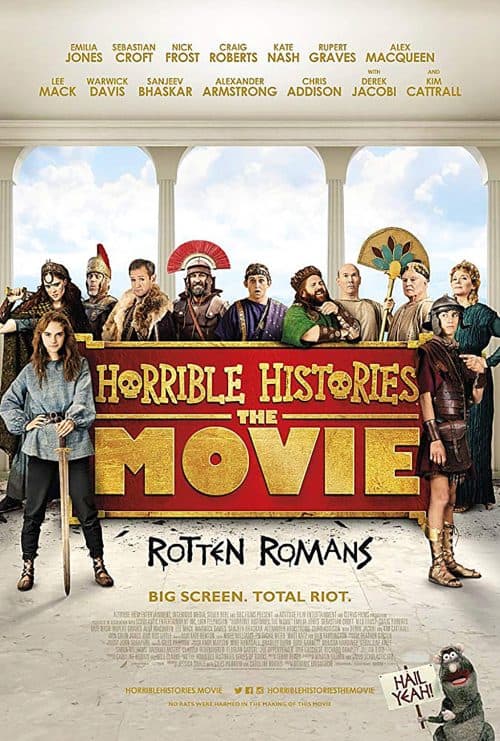 Roman teenager Atti is conscripted into the Roman Army after falling foul of Emperor Nero. He is sent to “miserable, cold, wet Britain” where “the natives are revolting, quite literally”. Things go from bad to worse when Atti is captured by Orla, a teenage Celt determined to prove herself as a warrior. After avoiding execution in a bog, Atti uses his Roman ingenuity to help Orla save her grandma who was kidnapped by the Braganza tribe. Nero, who spends much of his time plotting to kill his mother is also determined to crush the rebellion, led by Boudicca, Queen of the Iceni.

Atti re-joins the Roman troops and discovers they are planning a battle against the Celts at Watling Street. Atti persuades the governor Paulinus to follow his battle plan, but that could also spell disaster for Orla as the friends are lined up on opposite sides of the battlefield. I found the film slow going although there was some notable acting especially Lee Mack as Decimus the centurion desperate to get back to Rome.

However my 10 year old Granddaughter rated the film much more highly than I did….here are her comments – “I really liked this film because of its fun, interesting message and its amazing songs. The message of friendship, believing and following your dreams was strong throughout accompanied by a whole lot of comedy from many well-known stars. However if I’m honest the jokes were disgusting, mostly about sick, wee and poop! The whole film was however extremely funny with much music all the way through. It was historically accurate although some parts were left out, but only those things that were too gruesome for a kid’s film. Overall this film was amazing and I loved it and I will give it five stars!”

Who am I to disagree with a real expert on kids films! We will give it five stars and the real credit for this review should go to Grace my 10 year old Granddaughter!