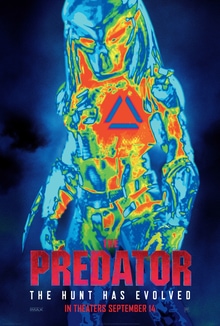 From outer space to the backwoods of southern Georgia, the Predator comes back in Shane Black’s reinvention of the Predator series.

Now, the universe’s most lethal hunters are stronger, smarter and deadlier than ever before. And only an unlikely crew of ex-soldiers and an evolutionary biology professor can prevent the end of the human race.

This movie is full of gory action in keeping with the Predator genre. A Predator ’traitor’ crash lands with a package that may save the human race but this is not revealed until the last moments of the film. In the meantime he is captured by mysterious extra governmental agency but escapes slicing up a lot of mercenary soldiers along the way. The highly intelligent son of the principal character an army sniper Quinn McKenna played by Boyd Holbrook  manages to hack into the predator hardware and the signs of this are picked up by a super Predator sent to hunt down the traitor and capture the boy to improve the predator genetic code. Some intense scenes follow with the father and his band of ex-soldiers battling to rescues the boy.

This film lacks the strong plot of the original Predator with some weak links in places but on the whole is very entertaining and a worthwhile view with plenty of action.