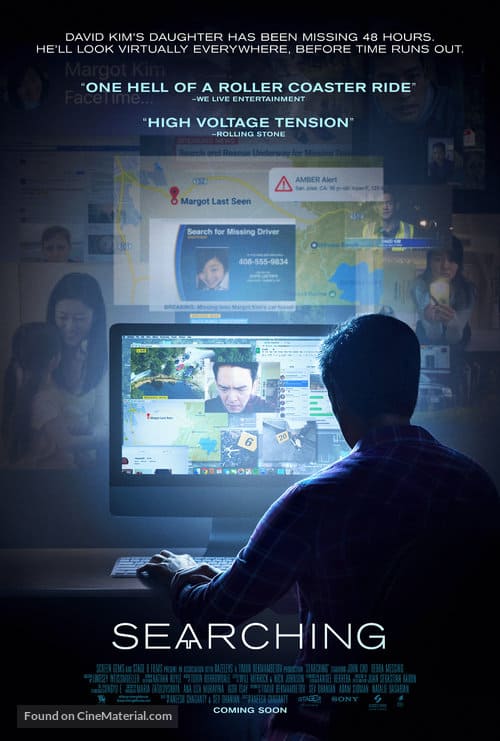 I took my two teenage daughters, aged 14 and 13, to see this film. What a great film.

It is very current and really highlights the use of social media in our everyday lives. The endless photos and videos that we take and the many social media platforms that are out there. The film also brings to your attention, the good and the bad of social media. The whole film puts you in the eye of the camera. Whether it be one of the many Facetime video calls or one of the secret spy cameras. Much of the communication throughout the film is via iMessage, which is cleverly shown to the viewer, to make you feel like you’re right in the story.

The story is about a single father, David Kim, whose teenage daughter Margot, goes missing.  The film begins by showing clips of their family life, over several years, when David’s wife, Pam, was alive. Filling their computer up with family videos, photo memories of the 3 of them and poignant emails from Pams inbox. Now to the present day, when Margot fails to come home from school, or go to school the following day. When a distraught David realises Margot is missing, it is thanks to her social media presence and his wife’s computer history that he is able to do his own searching for her. Over the following days, he realises he doesn’t know as much about his daughter as he thought. Working closely with the lead detective, Rosemary Vick, on the case, Davids searching, through Margots laptop, reveals suspicions about people around him.

The film is a tense thriller. John Cho plays the part of David brilliantly and the character is believable. You really feel his emotions and frustrations.  This films use of social media is very relatable. My daughters both loved it and enjoyed how it was portrayed through iMessage and Facetime. I highly recommend this film. I could easily watch it again.