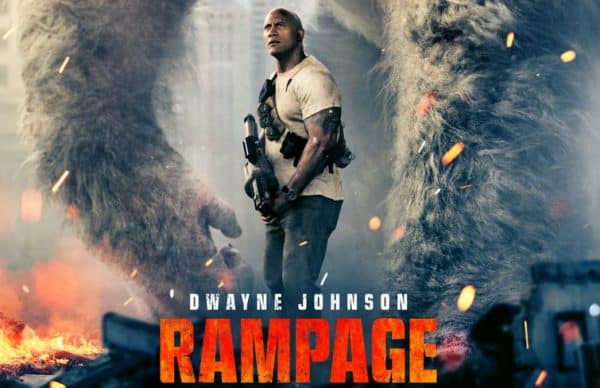 Based on a popular 80’s arcade game, Rampage is about three huge creatures wreaking havoc through mankind’s cities. Davis (The Rock) aprimatologist and handler of the main creature George the albino gorilla who is unsuspectingly exposed to a substance capable of rapid growth and heightened aggression.

While the exposed creatures destroy everything in their path, Davis teams up with Dr Chadwell (Naomie Harris and Agent Russel (Jeffery Dean Morgan) to ultimately stop them and try save his gorilla. From the off the movie wastes no time introducing you to the relationship George and Davis share, this however is as close as you’ll get to being attached to the otherwise weak and forgetful plot.

But lets be honest, you’re here for 2 things…The Rock’s Biceps and Giant Monster Set Peices. If you can give this movie credit for anything its the immense visuals and rapid action. Watching three beast level cities and skyscrapers like matchsticks is infinitely satisfying no matter the audience. Weta Digital known for their VFX on Planet Of The Apes have not lost their magic in making each beast beautifully animated and believable.

The Rock once again exceeds at playing himself for yet another big blockbuster, but strangely the muscle jokes never get old. “Thats a big arm, don’t fight it’ *easily the quote of the movie*.

For what this movie set out to achieve it has nailed with its bold action, some welcome chuckles and….well…The Rock, but expect nothing more than what it says on the tin.